Our lives were forever changed when we met our little Gracie from a rescue. Although she was the very first puppy we ever considered, she wasn’t the first puppy we “interviewed.” After meeting a few crazy, young breeds of puppies, and not not feeling 100% confident, little Gracie was carried out to us. She calmly walked over to me, stared into my eyes, and then crawled into my arms for a hug. Without hesitation, I knew in my gut that this little pup was special and I wasn’t leaving the shelter without her.

Having not grown up with or been around many dogs, the idea of getting a dog, no less a puppy, was terrifying for me. I’ve been ready for babies for awhile now, but a puppy always seemed way too catalytic. I mean, at least babies grow up to be humans and understand us eventually, right? Puppies just woof, poop, steal food, carry germs, and shed. However, my hubs was the complete opposite. He grew up around big, small, hairy, and energetic dogs, but he loved the chaos. The bigger the dog, the better playmate and cuddler for him. Deciding on a breed was one of the more challenging decisions we had to compromise on. After many discussions, headaches, and puppy interviewing, Gracie Wilson found her way into our family. 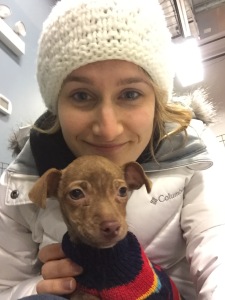 As cute and as precious as she is, having a puppy is no joke. It’s not as difficult as having a newborn human, but it’s still very tough to be a new puppy-mama. Here are some things I wish I fully understand BEFORE getting Gracie:

Your Sleep is Officially Gone

I have always enjoyed getting a full 8+ hours of sleep, especially sleeping in on a long three day weekend. I don’t regret getting Gracie, but as I write this post hyped up on coffee (which I rarely ever drink anymore) and tired AF, I REALLY miss those days where I would be well rested. I got a few warnings that puppies “cry” when they start night crate training, but sweet Jesus, I had no idea how loud or long they would wimper for. And I’m talking loud enough that our upstairs and downstairs neighbors can hear. We’ve only had her for a little over a week and the longest I’ve slept has been 5h straight.

Poop is Your Friend

I actually thought I’d be mortified at the thought of picking up Gracie’s poop. I mean, I don’t mind doing my own, but for someone else’s hell no! However, after about the first four of her poops (while she was sick), I got over that hump really fast, because you just have to. Both of your hands have to be ready to hold the dog before it runs off and clean up the affected area. I’m proud to say that I can pick up a fresh piece without even wrinkling my nose anymore.

Unlike Human health insurance, don’t EVER get dog insurance, it does absolutely nothing. The shelter we got Gracie at came with a package of a free 30 day trial of pet insurance. However, that doesn’t cover anything you would need at a normal vet visit. Because Gracie was sick when we adopted her, some of her medicines were covered, however, if you’re going for a checkup ($65+ Just to walk in the door) and get any tests or shots done, prepare to pay a total of $140-200 by the time you leave the vet. FYI — besides getting Gracie spayed ($175-200) , we have three vet appointments scheduled in the near future for follow up checkups and her normal puppy shots.

It’s not their fault, puppies are babies. They don’t know their name, they don’t know commands, or where their crate is at. Until they’re about 4ish months, it’s very difficult to have your puppy remember all of your name choices for things. It’s very clear that Gracie is not in the sponge-mindset yet because the only thing she responds to is a piece of chicken. Fingers crossed that once her illnesses are gone, she’ll begin to pickup on a lot more. 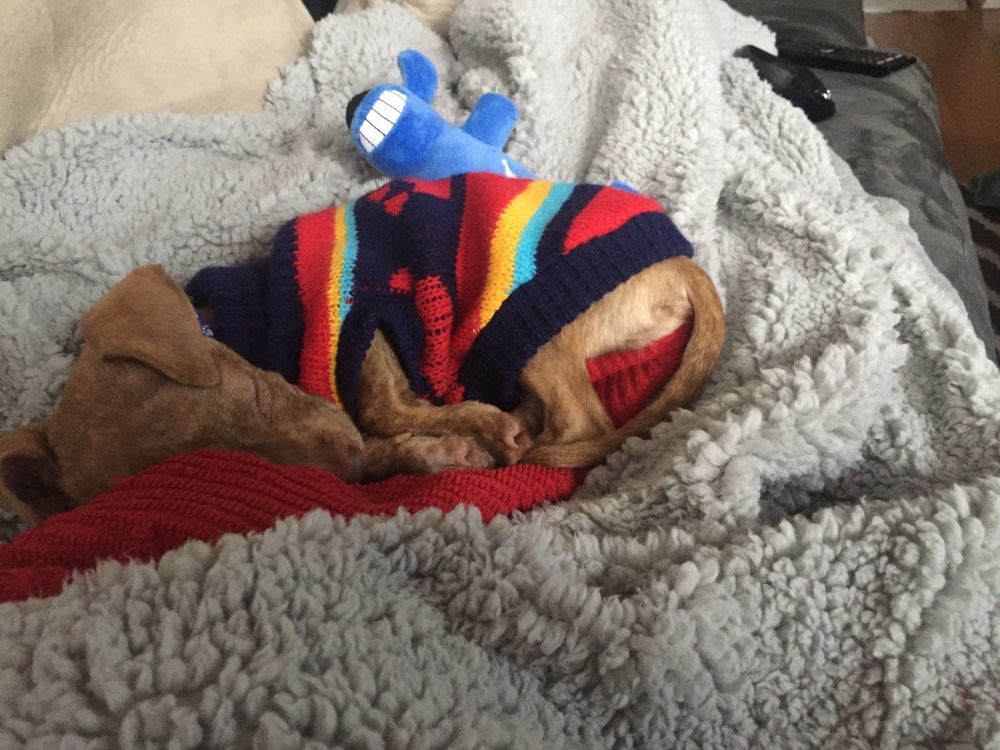 We learned this the hard way the first week we had Gracie. To be devil’s advocate, I felt like we had no choice by the crate train her while we’re at work and then crate train her at night because she didn’t consistently poop on the pad. Even typing that out, I feel like an idiot for doing that to her. That’s like 90% of her day in the crate. Having a dog in a crate for crazy amounts of time will cause the puppy to get super pissed off and stressed out. That’s exactly what happened to us last week when Gracie woke up ever other hour to rip up items, squeal, and bite the cage.

Puppy Snuggles are the Best

As mentioned above, I have never been a dog person in my life, only a kid person. Sure, I like dogs, but I never felt the right connection to reach down and play with one. Being grossed out with dog germs and dog fur in general made me really worried I’d never be able to let my guard down with our future pup.

However, now that Gracie is in our lives, I can’t imagine not snuggling with her, even after she puked 2x in a row on our rug. When we met Gracie, she didn’t jump on me or get all crazy like normal puppies. Gracie cocked her head to the side, stared at me with her little almond eyes, and then walked into my lap. Because she was gentle and beyond precious, I knew that she was the right first dog for me. Although she is still very sick and probably doesn’t feel well (she survived Parvo prior to being rescued, has puppy cough, and a stomach parasite), Gracie gives the best snuggles and hugs.

Because she is so tiny, we can even pick her up like a baby; she puts her head on our shoulders and hides her face to feel our body warmth. To sum it up, puppy snuggles will make your heart melt. 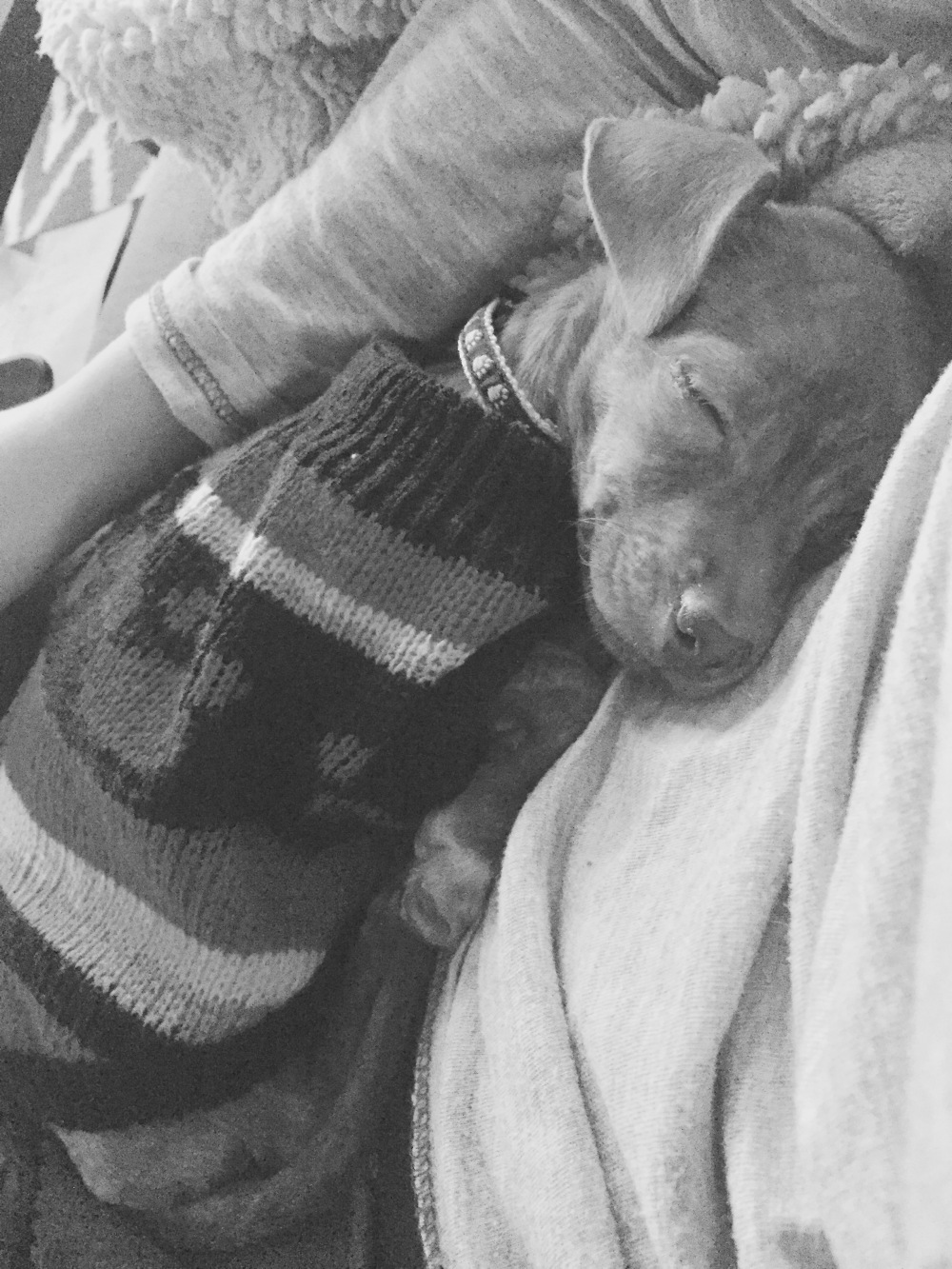